Check it out on Udemy.com *

Welcome to our tutorial on how to generate React components from JavaScript code using ChatGPT. In this guide, we will explore the benefits of using ChatGPT for this task and walk you through the step-by-step process.

React is a popular JavaScript library for building user interfaces, and generating components is a common task when working with it.

ChatGPT is a powerful language model that can help automate this process by generating React component code based on a set of inputs. By using ChatGPT, you can quickly and easily generate high-quality React components, saving you time and reducing the risk of errors.

In this tutorial, we will show you how to use ChatGPT to generate React components from JavaScript code. Let's see how that works …

React is a JavaScript library for building user interfaces. It allows developers to create reusable components that manage their own state and can be easily composed to build complex UIs. React components are a fundamental building block in React development and are used to encapsulate and manage the logic and rendering of a specific part of the UI. Each component can have its own state and props, which are used to pass data and actions from parent components to children. React's component-based architecture makes it easy to build and maintain large-scale applications. 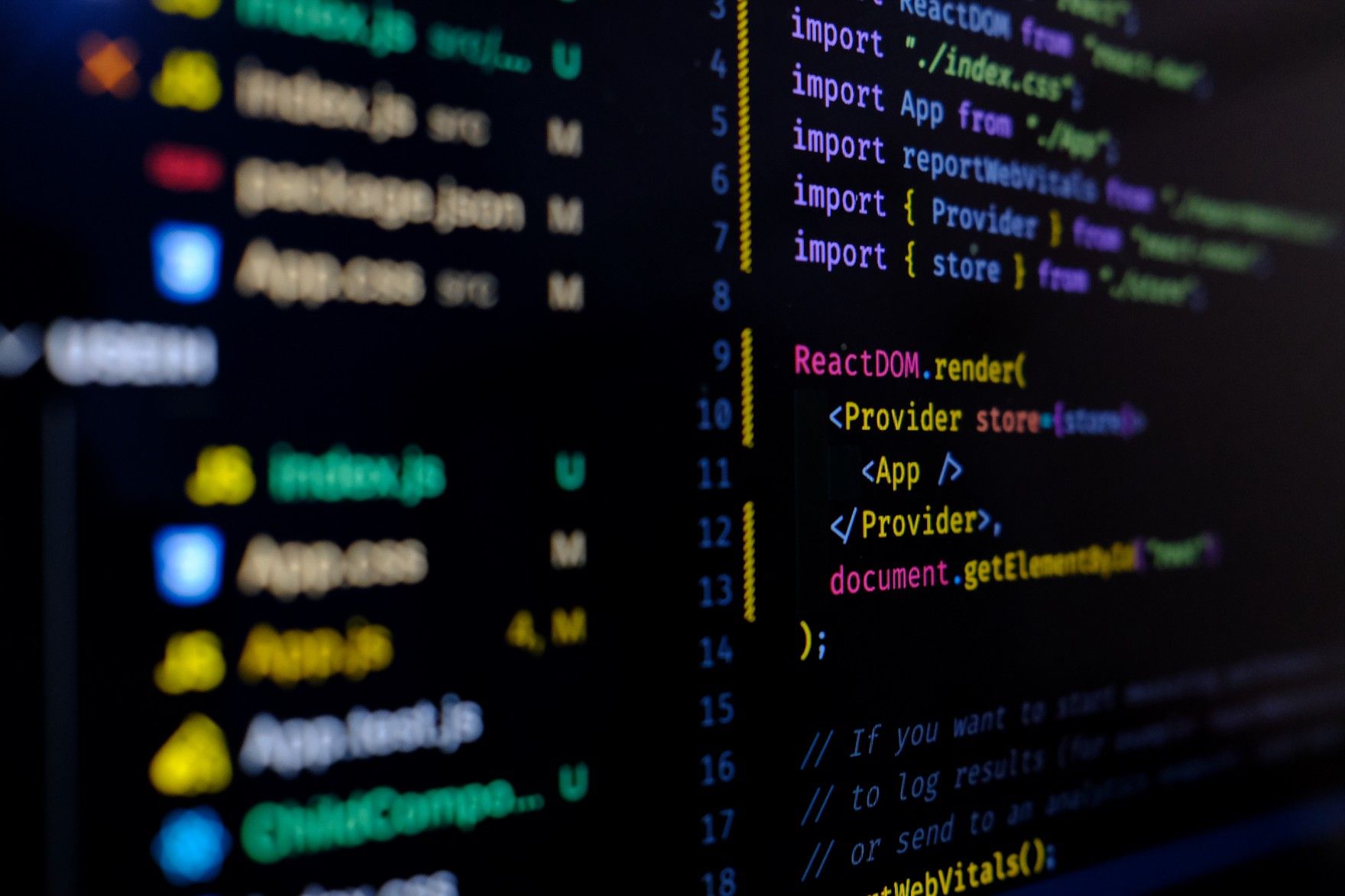 Photo by Rahul Mishra on Unsplash

Let's start with an easy JavaScript example. Take a look the following lines of code:

This code creates an HTML input element and a button element, and then appends them to the body of the current web page. The input element is given a type attribute with a value of text, so it will be rendered as a text input field. The button element has its innerHTML property set to Say Hello, so it will display the text Say Hello on the button.

When the button is clicked, the code inside the anonymous function attached to the "onclick" event of the button is executed. This code retrieves the current value of the input element, assigns it to a variable called name, creates a new div element and assigns it to a variable called hello, sets the innerHTMLproperty of the hello element to a string Hello concatenated with the name variable and finally, appends the hello element to the body of the current web page.

In summary, this code creates an input field and a button and when the button is clicked it retrieves the value from the input field, creates a new div element with the text

and appends it to the body of the current web page.

Converting This JavaScript Code To React With ChatGPT

A React component can help to better structure this code by breaking it down into smaller, reusable parts. Instead of manipulating the DOM directly, as is done in the original code, a React component can manage its own state and render itself based on that state.

For example, a React component could have a state variable to store the input value and a function to handle the onClick event of the button. The component would then use this state to render the input field and the button, and use the function to update the state and render the "Hello" message.

Let's ask ChatGPT to do the transformation for us:

As a response we're getting back: 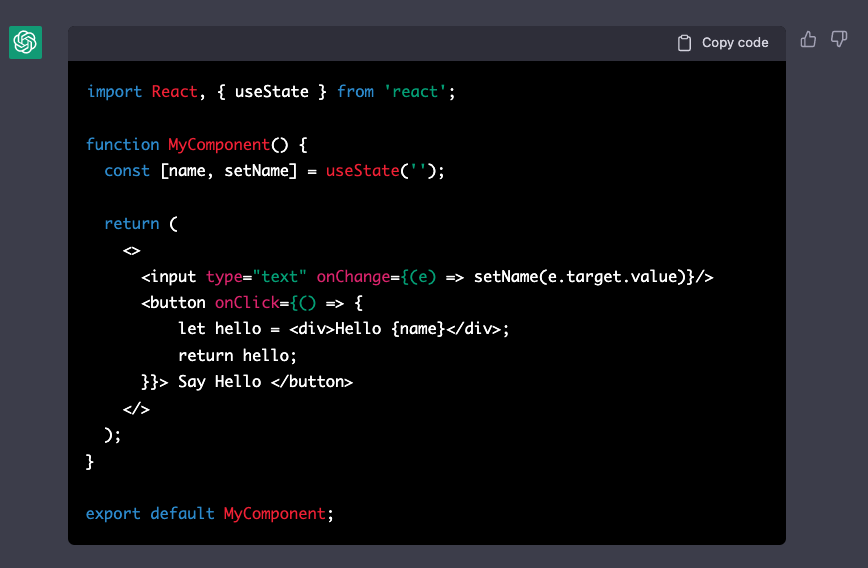 Furthermore ChatGPT is providing some helpful explanations to us as well:

Turn It Into A React Class Component

React functional components are JavaScript functions that return React elements. They are typically used for simple components that do not need to manage state or lifecycle methods. They are easy to read and test.

React class components, on the other hand, are JavaScript classes that extend the React.Component class. They provide additional features such as local state, lifecycle methods, and the ability to handle user events with methods. They are typically used for more complex components that need more functionality.

Let's see if ChatGPT can also help us converting the functional component code to a class component implementation by asking:

"Convert the React component into a class component"

As a response ChatGPT is providing us with the complete re-implementation of the component as a React class component: 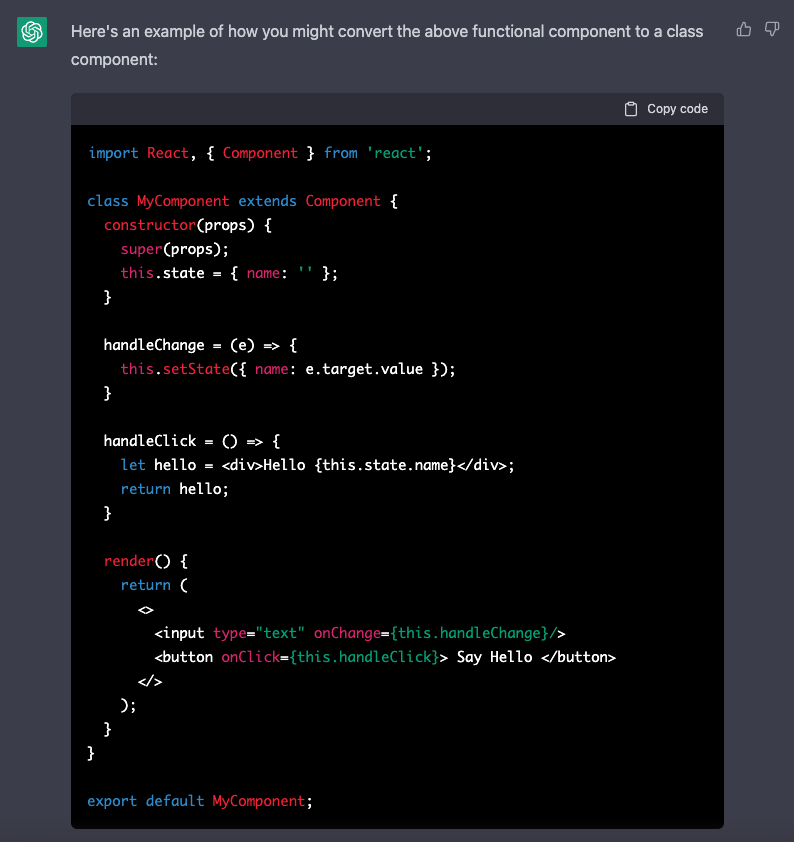 ChatGPT can be a powerful tool for developers who need to convert existing plain JavaScript code into React components. With its advanced natural language processing capabilities, ChatGPT can quickly understand the structure and functionality of your code, and generate corresponding React component code that is both efficient and easy to read. Whether you're working on a new project or updating an existing one, ChatGPT can save you time and effort, allowing you to focus on creating a great user experience. Additionally, ChatGPT can help you with many other programming-related tasks and it can be a valuable support for developers of any experience level.